Due to severe setbacks of the Sodor and Mainland Railway, trains only ended up running between Kirk Ronan and Ballahoo, and by 1870 the company was already teetering on the verge bankruptcy. By this point, the people of Peel Godred had realised that their promised branch line would never be built by the S&M and came to the conclusion that they must build it themselves. They initially favoured a line built on the route proposed by the S&M, but as it would have involved a junction somewhere with the S&M, most felt that to embark on such a project would be the height of imprudence. They opted to look elsewhere, which led to the formation of the Mid Sodor Railway in 1872.

Bankruptcy finally came in 1901, and the last of its locomotion were scrapped that year, bringing services to an end, but the company remained in being, simply dormant. In 1914, the railway was merged with the Wellsworth and Suddery Railway and the Tidmouth, Knapford and Elsbridge Light Railway to form the North Western Railway in a Government-sponsored amalgamation of the standard gauge railways in the Island to create a strategic railway for coastal defence against possible danger from Ireland. The S&M line between Kellsthorpe and Crovan's Gate became part of the Main Line, while the section between Kirk Ronan and Kellsthorpe Road became the Kirk Ronan Branch Line, and the section between Crovan's Gate and Ballahoo became part of the Norramby Branch Line.

The line starts at Kellsthorpe Road and calls at Rolf's Castle before ending at Kirk Ronan. The line serves the harbour here, and ore and slate from Crovan's Gate are sent here. Kirk Ronan is known as a fishing port, so fish are unloaded here. A steamer service to Dublin is operated on Tuesdays and Fridays from Kirk Ronan, so tourists may use the railway as transportation to the port.

In the television series, an extension of the branch begins near the Cement Works, Hawin Croka Canal and heads west to Pirate's Cove at the main line loop. The Big Dipper, Sodor Bakery, Diesel 10's Mountain, the Sodor Wishing Well, The Magic Railroad, Pirate's Cove and Sodor Maritime Museum are located along the extension. 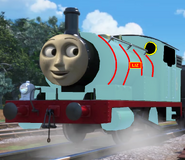 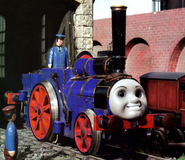 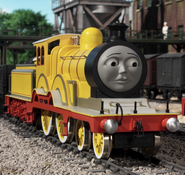 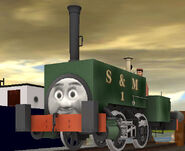 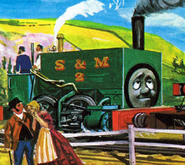 Matt (formerly)
Add a photo to this gallery

In The Railway Series, the branch line only briefly appeared in a flashback in Very Old Engines.

In the television series, Kirk Ronan appeared in a number of fifth series episodes, most prominently in A Better View for Gordon, when Gordon crashed into the station wall during the opening ceremony. The junction to the branch has appeared frequently since the eighth series. 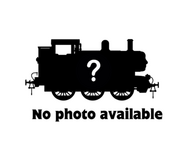 Kirk Ronan Harbour
Add a photo to this gallery

Retrieved from "https://tttefanfic.fandom.com/wiki/Kirk_Ronan_Branch_Line_(Pstephen054_version)?oldid=90904"
Community content is available under CC-BY-SA unless otherwise noted.