Thomas and the Magic Railroad (T&F)

Lady is a small, Victorian-styled golden tank engine who serves as the guardian of the Magic Railroad, using her magic to keep all the worlds of Shining Time and Sodor alive. She now works on Ffarqhuar Branch Line.

Lady once came to the Island of Sodor a long time ago, when she was found by Diesel 10, an evil diesel engine who wanted to destroy her. Lady and Burnett both ran away from Diesel 10, but during the chase, Burnett used up all her coal and made her go too fast, causing Diesel 10 to catch up and crash her. Lady was taken back to Muffle Mountain and stored inside Burnett's workshop, where he spent years trying to desperately to restore her to working order, but he did not have the right coal to make her steam.

Years later, Lady was still out of service, and without her, the Magic Railroad began to lose its magic. That all changed when Lily, Burnett's granddaughter, and Thomas brought a truck of coal from Sodor to Muffle Mountain, which proved to be the coal necessary to make her steam. Lady came back to life and returned to Sodor, where she was once again chased by Diesel 10. Lady, Burnett and Thomas successfully managed to escape Diesel 10, and she gave the Conductor Family the gold dust they needed.

When the steam and diesel engines were facing a fallout, Lady and Rusty both appeared to Thomas in a dream of his, and she told him how to resolve the conflict between the two kinds of engines.

Lady appears to be a freelance design, with no real known locomotive prototype. But it's possible that her design might be based on the Great Western Railway experimental locomotive numbered 101. The GWR 101 was withdrawn and scrapped in 1911, as it was the only single engine built just for experiment tests.

Lady is painted red-purple with gold head lamps on her front footplate, tail lamp, gold buffers, smokebox, funnel top, dome, whistle, side rods, lining and her name on each side in gold. She is also painted a very dark purple on her cab roof, lower funnel section and her footplate. 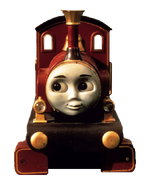 Add a photo to this gallery
Retrieved from "https://tttefanfic.fandom.com/wiki/Lady?oldid=68494"
Community content is available under CC-BY-SA unless otherwise noted.