The company's logo consists of a chimney with steam coming out and is surrounded by a large cog wheel. Victor, Basil, Kevin, numerous rolling stock, vehicles and staff uniforms, all have this logo on their livery and appearance. 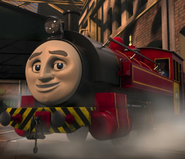 Basil
Add a photo to this gallery 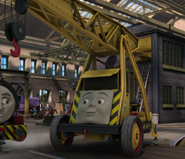 Kevin
Add a photo to this gallery

Equipment at the Steamworks includes:

It may appear in the twenty-fourth series.

The Main Line
Retrieved from "https://tttefanfic.fandom.com/wiki/Sodor_Steamworks?oldid=93776"
Community content is available under CC-BY-SA unless otherwise noted.