Thomas and Friends: Revenge of the Scrap-Yard Diesels

Thomas and Friends: Revenge of the Scrap-Yard Diesels is a direct-to-DVD special releasing on May 13, 2020.

This tale starts as any other day for the engines on the Island of Sodor.  Today is an especially exciting day; a new engine is arriving by sea!  All the engines hurry to finish their jobs and race to the docks to welcome him.  After being unloaded by Cranky, the new engine introduces himself as Remus.  The other engines, while waiting for Sir Topham Hat to arrive, decide to meet-and-greet with Remus.  Sir Topham Hat, who arrives during these introductions, tells Thomas and Percy to give Remus the full tour of Sodor.  They agree and set off with Remus by their side.

First, Thomas and Percy take Remus to the Sodor Steamworks, where Kevin is causing chaos as usual.  Then, he’s taken to the Sodor Search and Rescue Center, where three other new engines are introduced: Jack, a spry little tank engine; Bill, a hard working crane engine; and Kudos, a white front loader/breakdown vehicle. Along the way to their final destination, Remus met several other new friends, such as Edward and James (who become his best friends), Charlie and Bertie, Spencer and Rocky, and even devious Diesel, who Thomas and Percy claim is “evil and untrustworthy”.  Finally, Thomas and Percy take Remus to a newly-introduced building, the Sodor Delivery Company, where packages and parcels from around the world are distributed all over the island.  There they meet Mach, a clumsy red and white delivery van, who accidentally knocks a few crates over.  Thomas and Remus say good night to Remus and head away to Tidmoth Sheds, where Sir Topham Hat is issuing jobs for the next day.  He speaks to Thomas first, ordering him to finish his tour with Remus, and then to the other engines – “A surprise will be arriving at the docks by tea time, so don’t be late to welcome it.”

The next day, Thomas takes Remus to see Misty Island, where he meets Bash, Dash, and Ferdinand and has fun all day.  On the Island of Sodor, it’s a different story.  Three new diesel engines have just arrived at the docks: Davenport, a Class 07 0-6-0 Dock Shunter; Scrounge, a Class 08 Diesel-Electric Shunter; and Maverick, a British Rail Fell diesel locomotive with a retractable claw. They call themselves the Scrap-Yard diesels, and Sir Topham Hatt warns all the steamies to be careful because The Scrap-Yard Diesels are super dangerous, at The Sodor Smelters Yard, Davenport, Scrounge and Maverick scrap any engine that gets in there way even if the engine is a good guy.

Remus is right—Davenport, Scrounge, and Maverick have been causing trouble all month, scraping steamies for no reason at all just to be mean to them, and the engines were afraid of them. and considered them the most dangerous engines in the world (even more dangerous then Diesel 10)  Even the Other Diesels didn't want to be around them.  Later that night at Tidmouth Sheds, the other engines bring Thomas and tell him to stay away from The-Scrap-Yard-Diesels. Salty rolls by and hears the engines talking about Davenport, Scrounge, and Maverick.  He says “Beware !” and begins to tell of a powerful engine named Hugo.  The engines listen so intently to Salty’s story that they do not notice Davenport rolling by and secretly to kidnap Percy and take him to The Smelters Yard to be scraped stopping to listen to the story, too. Salty continues:

“It was a long, long time ago… Hugo used to work on the mainland, pulling heavy trains of cargo in and out of them big stations.  He was a big and strange engine, with ‘is ten wheel drive and a big box sittin’ atop ‘is boiler.  Argh and he soon became famous when he snatches himself a group of diesels better known as the Scrap-Yard Diesels!  Then, he reports them to the stationmaster, where he sends them diesels away to change their behaviors, which are the worst.  As a reward, Hugo was sent away to ‘is homeland of Star Island to work on the railways there. Argh, alas, but when it arrived at Star Island, the islanders reported back to the mainland docks that the ship had been badly damaged by what might have been rocks… and Hugo was no where to be found!  Oh yes, this strange mystery of missing engine has not been solves yet but, there is a rumor.  It is said that before the ship reached Star Island, it crashed up against another island, leaving Hugo behind.”

The engines are hushed by Salty’s story, but Davenport grows worried.  He rushes back to the Sodor Smelters Yard and exclaims that the engines know about Hugo!  He tells them what Salty has said, and soon, Maverick and Scrounge share Davenport’s worry.  Maverick makes it clear to the others that they cannot allow the engines to find Hugo.  The next day, Edward and James are at the Search and Rescue Center, telling Remus, Jack, Bill, and Kudos about Salty’s story.  They are contemplating whether there is any truth behind Hugo’s existence when Davenport rolls by.  He tells Edward and Jack that Sir Topham Hat requests them at the Sodor Dieselworks. This, however, is a trap—as they arrive, they are kidnapped into the Dieselworks by Davenport and Scrounge!

Over the next couple of days, the Scrap-Yard Diesels are wrecking havoc all over the island.  They biff and bash freight cars off the tracks, the Troublesome Trucks, Vans, Tankers, and S.C. Ruffey were mostly annoyed at this and wanted to pay them out, and push the other engines around, making them late for pick-ups at the Sodor Delivery Co., and cause confusion and delay. They even piss off Diego and Shira. One particular day, Thomas and Percy are at the Sodor Delivery Company when Maverick rolls in.  Suddenly, he swings his claw down over Thomas’ funnel and knocks over his and Percy’s loads!  Packages and parcels were flung all over the place, blocking the tracks.  Thomas decided that enough was enough; he pushed through the boxes to give chase to Maverick.  They race through country-sides and rattle across bridges before finally arriving at the Sodor Smelters Yards.  Thomas sees Maverick roll in when Thomas is stopped by the sound of a familiar steam whistle.  Thomas pauses for a minute to think before following after Maverick.

The Smelters Yard is a terrifying sight; gears grinding, machinery creaking, and there is an eerie, red glow to the building.  Thomas puffs forward a few feet and is then lifted high into the air by the Scrapper, a crane that would normally haul scrap metal over to the Incinerator!  Soon, Thomas is face-to-face with Maverick, with Davenport and Scrounge just below.  Maverick asks Thomas: “What are you doing here?”  Thomas replies with another question: “What are you three doing here? You’re causing all sorts of trouble for us, and I demand to know why!”  Maverick says that they know the Steamies know about Hugo, how he defeated them in the past.  They do not want Hugo to be found, and here’s why: the Scrap-Yard Diesels plan to return to the mainland so they can wreck even more havoc without the annoyance of Hugo stopping them!  Thomas is shocked, but then remembers one detail: Sir Topham Hatt! Thomas proclaims that Sir Topham Hatt would never allow them to go through with their plan, that he could surely stop them. The diesels have already thought of this – first, overthrow the “big, fat man” (quoted by Maverick), then control the docks!  Then, Maverick tells the Scrapper to scrap Thomas!

Before it can process this thought, however, the sliding doors burst inward to reveal James, Toby, and Whiff charging through!  The diesels are very surprised by this sudden entry, and as the Scrapper, still carrying Thomas, spins around in confusion, the cable line snaps!  Thomas flies through the air and lands on the flatbed that Whiff is pushing.  Then all four engines puff and chuff away from the Smelters Yard, pulling Thomas with them and leaving the Scrap-Yard Diesels dazed. Later that night, on the way back to Tidmoth Sheds, the engines pass Dennis, who appears to have been pushed off the tracks and into some bushes and left where no one could see him.  “What happened to you?” Thomas asks Dennis.

"Them nasty diesels pushed me right off the rails!," he begins, "The new diesels - them Scrap Yard Diesels - their nice-and-harmless attitude about things is just a cover-up! Them and their nasty behavior once got the best of them when they were caught by Hugo and sent away in disgrace. But it seems that they have come back, stronger, smarter, badder. Do be careful with them Thomas. But please, help me back onto the tracks."

"Alright Dennis, I will be. And I'm sorry but i can't, we must reach Tidmouth Sheds first; but we'll be back and come help you, i promise." Dennis sighed but agreed. So Thomas and the engines continued on their way. Soon, Thomas, Whiff, Toby, and James reached Tidmouth sheds. All the engines looked up when they arrived. Thomas was pushed onto the turntable, with James and Toby by his sides on the other tracks. Thomas spoke up once he had all of the engines' attention. Thomas:"Hello everyone, don't worry I'm fine. But listen, the diesels almost had me scrapped today, it was an extremely close call; but luckily Toby, Whiff, and James saved me just in time. But today proved and made one thing very clear to me: We can no longer stay here at Tidmouth Sheds, or at Brendam Docks, nor the Sodor Delivery Company. However, I think I know of a place that we can go and stay at where we'll be safe." "And what might that place be Thomas?", asked Gordon. "Well, I think that we should go and stay with the narrow gauge engines at the Steam works, the works at Crovan's gate, the Blue Mountain Quarry, or just move to the high hills with the narrow gauge engines for a while until we can take down these diesels." All of the engines agreed. So that night, after planning where they would stay, all the engines at Tidmouth Sheds set off for the high hills, with the narrow gauge engines. Thomas remembered Dennis, and asked Henry to help Dennis get back on the rails. Luckily, Judy and Jerome happened to be at Tidmouth, so Henry brought them along with them. Along the way, Henry, Judy, and Jerome quickly got Dennis back onto the tracks, and then they, along with Gordon, James, Toby, Percy, Edward, Thomas, Whiff, and Emily, set off for Crovan's gate works and the Steam works. Also, they stopped by Knapford yards, and quickly picked up Annie, Clarabel, and Henrietta. Then they stopped by a few sheds along the way, with the engines dividing into groups to go find their friends faster.

The City of Prague Philharmonic Orchestra - Performs the Music 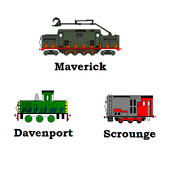 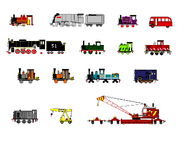 Supporting Characters
Add a photo to this gallery
Retrieved from "https://tttefanfic.fandom.com/wiki/Thomas_and_Friends:_Revenge_of_the_Scrap-Yard_Diesels?oldid=65196"
Community content is available under CC-BY-SA unless otherwise noted.