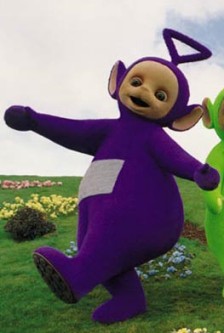 Tinky Winky is the first Teletubby who lives in Teletubbyland with the other Teletubbies.

Tinky Winky (played by Dave Thompson, Mark Heenehan, and Simon Shelton in the original series and Jeremiah Krage in the new series) is the first Teletubby. He is the largest and oldest of the Teletubbies, being 10 feet tall. He's covered in bright purple terrycloth, has a tomgirlish type and a triangular antenna on his head. He is notable for the red luggage (described by the show as a "magic bag", but often described by other media as a handbag) he always carries. He often hangs out with Po. His character has caused controversy due to allegations that his character's behaviour, bag, and body colour have homosexual qualities.

Tinky Winky started a still hinted at controversy in 1999 due to his carrying a bag that looks much like a woman's handbag (although he was first "outed" by the academic and cultural critic Andy Medhurst in a letter of July 1997 to The Face). He aroused the interest of Jerry Falwell in 1999 when Falwell alleged that the character was a "gay role model". Falwell issued an attack in his National Liberty Journal, citing a Washington Post "In/Out" column which stated that lesbian comedian Ellen DeGeneres was "out" as the chief national gay representative, while trendy Tinky Winky was "in". He warned parents that Tinky Winky could be a hidden homosexual symbol, because "he is purple, the gay pride colour, and his antenna is shaped like a triangle: the gay pride symbol".

The BBC, who co-produced the programme, made an official response, "Tinky Winky is simply a sweet, technological baby with a magic bag." Kenn Viselman of Itsy-Bitsy Entertainment, who distributed the show in the USA, commented, "He's not gay. He's not straight. He's just a character in a children's series."

In May 2007, Polish Ombudsman for Children Ewa Sowińska revisited the matter and planned to order an investigation. She said in the 28 May 2007 edition of Wprost that the handbag-carrying Tinky Winky could promote homosexuality. Journalists from Wprost mentioned claims that the Teletubbies promote homosexuality, to which Sowińska replied that she had heard of the issue. The journalists then asked about Tinky Winky. "I noticed that he has a woman's handbag, but I didn't realise he's a boy," Sowińska told the magazine in an interview that her office approved before publication, adding, "Later I learned that there could be some hidden homosexual undertones." Sowińska said she would ask her office's psychologists to look into the allegations, "and judge whether it can be shown on public television and whether the suggested problem really exists."

But on 30 May 2007, Sowińska said in a public statement that she no longer suspected the Teletubbies of promoting homosexuality. She said: "The opinion of a leading sexologist, who maintains that this series has no negative effects on a child's psychology, is perfectly credible. As a result, I have decided that it is no longer necessary to seek the opinion of other psychologists."

Despite the objections, the Independent on Sundays editors included Tinky Winky as the only fictional character in the 2008 inaugural "Happy List", alongside 99 real-life adults recognised for making Britain a better and happier place.

In an unrelated incident, reported in 2000, a girl's Tinky Winky Talk Together toy from Golden Bear reportedly said: "I got a gun!" Kenn Viselman claimed the toy actually said "Again, again!" a catchphrase from the show. In a similar incident in 1998, a girl's talking Po doll from Playskool was thought to be saying "faggot faggot, faggot faggot, faggot faggot, bite my butt", as well as "fatty, fatty." The toy was recalled and it was revealed to have said "fidit, fidit, and mon, mon" inspired by the Cantonese for "faster, faster, and slower, slower".

Retrieved from "https://tttefanfic.fandom.com/wiki/Tinky_Winky?oldid=53329"
Community content is available under CC-BY-SA unless otherwise noted.