By Toryreck Station is a small shed that Daisy normally stayed in. It was also used for placing rolling stock if she was not there.

Since Daisy moved to the Harwick Branch Line, it is now probably used as spare storage for another engine or rolling stock.

The shed only appeared in the fourth series. 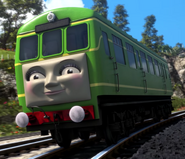 Daisy (formerly)
Add a photo to this gallery

Retrieved from "https://tttefanfic.fandom.com/wiki/Toryreck_Shed?oldid=75568"
Community content is available under CC-BY-SA unless otherwise noted.